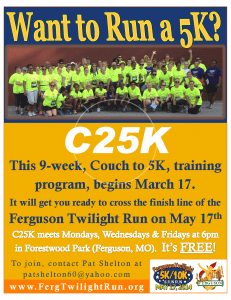 Ferguson, Mo. – The Ferguson Twilight Run’s Couch to 5K training program starts March 17. The free training runs are open to participants of all ages and fitness levels; you do not have to be a Ferguson resident.

The nine-week program will prepare runners and walkers for the Ferguson Twilight Run on May 17. Training sessions are Monday, Wednesday and Friday at 6:00 p.m. at Ferguson Sports Complex at Forestwood Park, located at 824 Ferguson Avenue.

To join the Couch to 5K program, contact Pat Shelton by email at patshelton60@yahoo.com.

The race route is USATF certified. Races start and finish at Plaza at 501, an outdoor entertainment area at the intersection of Florissant Road and Suburban Avenue.

Race fees are $20 for the 5K and 10K for early registrants. The race fee for the One-Mile Fun Run is $10. Participants can register online at www.fergtwilightrun.com