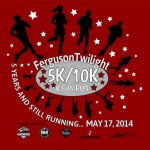 The best stories of the weekend will be the Ferguson Twilight Run.The fifth annual Ferguson Twilight Run is Saturday, May 17, 2014. It’s the only evening race in North St. Louis County, and each year, the race grows with more participation, more excitement and more fun! To date, the race has more than 1,800 registered participants. The goal is 1,900.This year’s race has three distances, free concerts by Island Duo and Javier Mendoza, free beer samples for adults, food vendors and specials at local restaurants.

Post-race entertainment includes a free, live concert with Javier Mendoza, part of the Ferguson Citywalk Concert Series. There will be free beer samples for adults, food vendors and specials at local restaurants.

The 2014 race will benefit four (4) local agencies – Emerson Family YMCA, Girls on the Run at Bermuda Elementary, Ferguson Youth Initiative and Marygrove. Each agency will receive a percentage of race proceeds.

INFORMATION:
Ferguson Twilight Run started in 2010 with a one-mile and 5K distance.  The 10K was added in 2013. The race is hosted by the City of Ferguson and sponsored by North St. Louis County businesses and organizations.