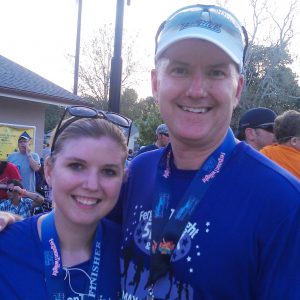 Scott Emmelkamp had never been a long distance runner, but he decided to run in the Ferguson Twilight Run with his daughter Katie last year. She ran the 5K, and Scott ran the 10K. Before last year, Scott was active in other sports like Taekwondo and tennis, but the thought of distance running was foreign to him. “Honestly, at first it was a struggle. My body had to adjust to using different muscles, but my motivation was the mental and physical challenge of distance running,” he said.